The Fiat 124 Spider is an intriguing proposition claiming to be an Italian two-seater, while actually being mostly Japanese. It gets a new body, engine and suspension configuration but still, the 124 shares so much with its Mazda MX5 brother it’s put together on the same production line. Having MX5 DNA is no bad thing though. Mazda has had several iterations of MX5 and they’ve time and time again proved to be the best sports cars on the market for the money. But why would Fiat go to the trouble of adopting but then changing Mazda’s near perfect recipe?

Well, unlike Mazda, Fiat has the luxury of having a hotter version in the form of the Abarth 124. This allows them to soften up the regular 124 Spider to cater for the not so serious drivers and leave Abarth to create the fully fledged driver’s car. In theory then, they should be able to snatch away potential MX5 customers with a more compliant ride and Italian charm. But, have they pulled it off? 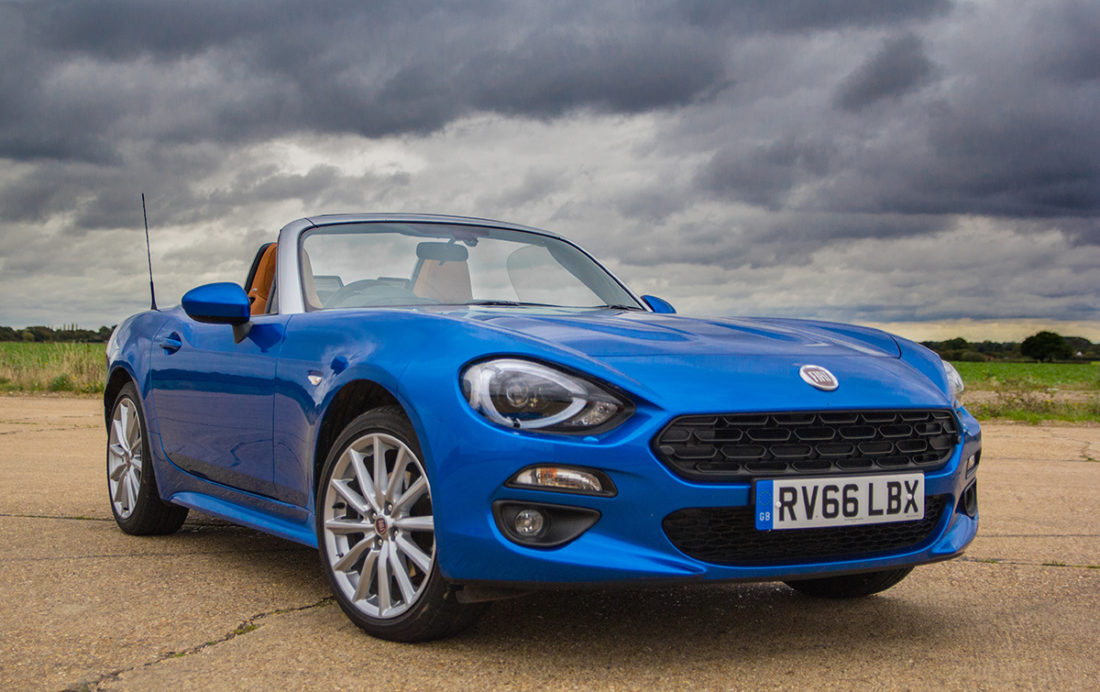 On first impression, the 124 is not as pretty as some of Fiat’s previous efforts, but you’d be hard pushed to find anyone that would call it ugly. The wide grille, large bug-eye headlights and extensive overhangs are just the right amount of retro styling cues to remind you of the 124s of old. Given time, the styling does grow on you and you’ll eventually conclude it is a very attractive car; certainly better looking the MX5.

I can’t escape the idea that the dimensions do look slightly off though. Almost as if the designers had finished a larger car before the suits upstairs agreed to put it on top of an MX5. The result is a slightly over-sized wobbly appearance. Nevertheless, the 124 draws plenty of attention. Almost everyone takes a second look and I found that I was forever being let out of junctions and given the right of way when I shouldn’t have been.

The roof mechanism is rather befitting of such a simple car. There’s no fancy electric folding hardtop to be found here. The 124 uses a very simple D.I.Y soft top that after a few practices, can be raised or lowered in seconds with just one lever to secure it in place either end. 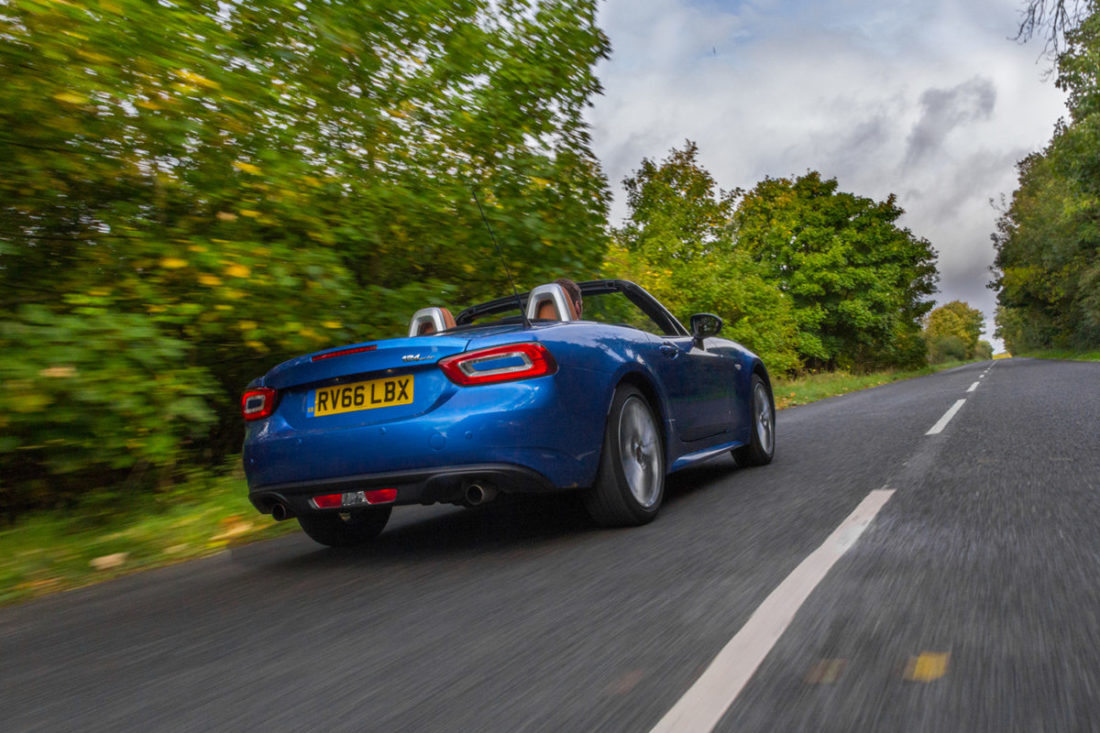 The first thing you’ll notice as you lower yourself into the 124 is that it’s snug. Very snug. If you slide the seat all the way back (you’ll want to if you’re even close to six foot) the angle of the seat is just too steep. Wind noise is fairly severe too especially at motorway speeds. Combine that with very narrow seat bolstering and a distinct lack of legroom, the 124’s charm quickly fades on longer journeys. That being said, you have to expect these sort of problems when buying a small soft top. And anyway, on shorter journeys or when you’re busy on a B road, these niggles are quickly forgotten.

Ergonomically the cabin makes sense. Everything is where you would expect it to be and thanks to the small space, it’s all easily in arms reach. The only exception to this is the infotainment controls. They’re located between the gear stick and the armrest, which means you’ll spend your time pressing the main selector wheel accidentally or folding your arm at strange angles in order to do so deliberately.

Once you reach it, you’ll discover the infotainment itself is flawed in several areas. Firstly, the interface feels slow and dated. When you start it up it takes near on 30 seconds to actually boot, which can be very frustrating for the people behind you at the pumps. The other issue is with the buttons themselves. Granted, the test car we drove had done just over 8000 miles at the hands of unforgiving journos, but every button press was sticky and different to the one next to it.

Infotainment aside, the 124 Spider is a nice place to be. There’s plenty of leather and a generous helping of aluminium. If you opt for the Lusso pack (it’s a must really) you get a nine-speaker Bose system which sounds absolutely brilliant even when you crank the volume right up. You’ll get heated seats, which on their highest setting could fry an egg, as well as a backup camera. You also get automatic headlights and wipers both of which work very well. 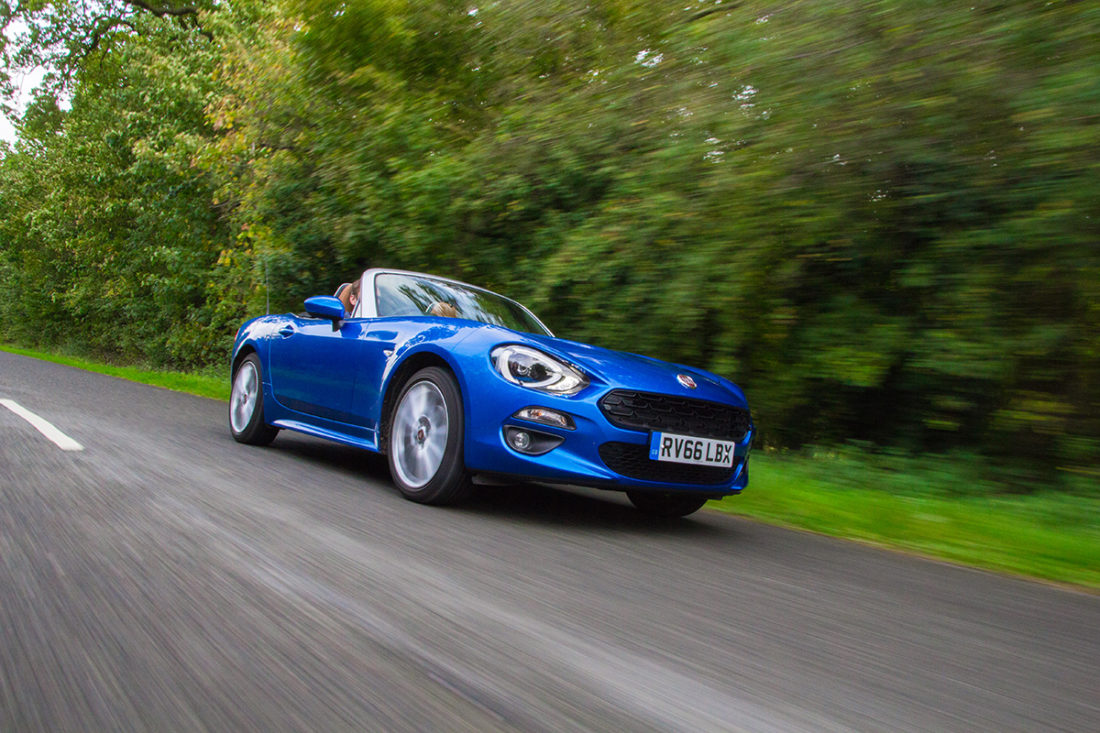 The Fiat 124 is powered by a 1.4-litre turbocharged four-pot outputting 138bhp and 177lb ft of torque. With just 1050kg to shift, the 0-62mph dash is completed in 7.5 seconds. While not exactly fast by today’s standards, the 124’s low ride height and torquey delivery make it feel quicker than the figures suggest.

Turbo lag is definitely noticeable and progress is virtually non-existent under 2000rpm. When the boost finally arrives, however, you’ll have no trouble overtaking Britains more annoying Sunday drivers. The plucky little four-pot delivers a fairly satisfying exhaust note too, although with the roof down you really can’t hear much of it.

The gearbox is plucked from the previous MX5 and is by a long way the best part of the car. The short, precise throws make rowing through the gears an absolute joy. The peddles are perfectly spaced for some heel-toe action as well making every gear change, up or down, ludicrously satisfying. 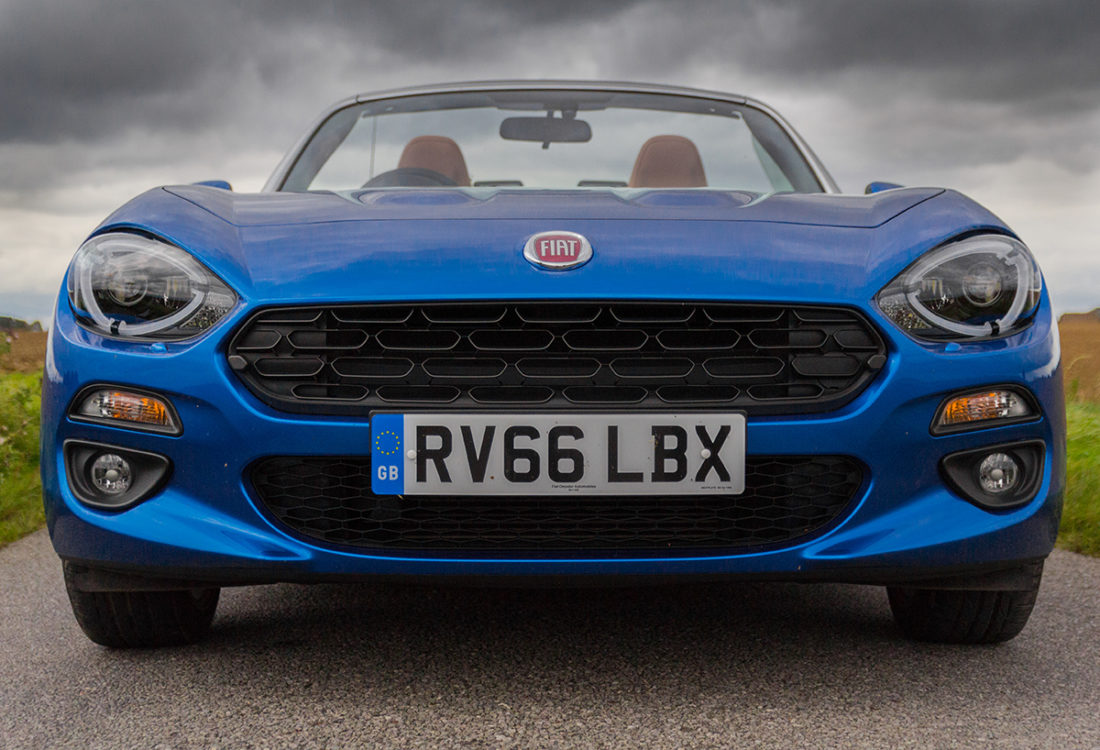 The ride is somewhat melodramatic but, in a straight line, this has a surprisingly positive effect. Plant your foot, the front pitches up giving the illusion you’re accelerating harder than you actually are. Under firm braking, the motion is strangely enjoyable too. In the corners, however, it’s just too soft. The 124 doesn’t have the surefootedness you’d expect from a small sports car, especially when transitioning quickly through tight S bends, there’s just too much roll. It’s a confusing setup though because when you explore the limits there is actually plenty of grip providing you’re on some half decent rubber.

To be fair to the Fiat 124, it’s designed to give a softer drive. As mentioned previously, if you are more serious about driving there is the Abarth version. So although it’s not quite stiff enough, you do end up with a more compliant ride which is much appreciated especially on British roads. It’s not quite accommodating enough to qualify as a proper GT but you could comfortably drive the 124 daily.

The steering justifies the raid of Mazda’s parts bin even further. The wheel diameter is just the right size and is easy to navigate. It’s weighted near perfectly and of course being rear driven, the feedback from the front wheels is uncorrupted, you know exactly what they’re doing at all times. 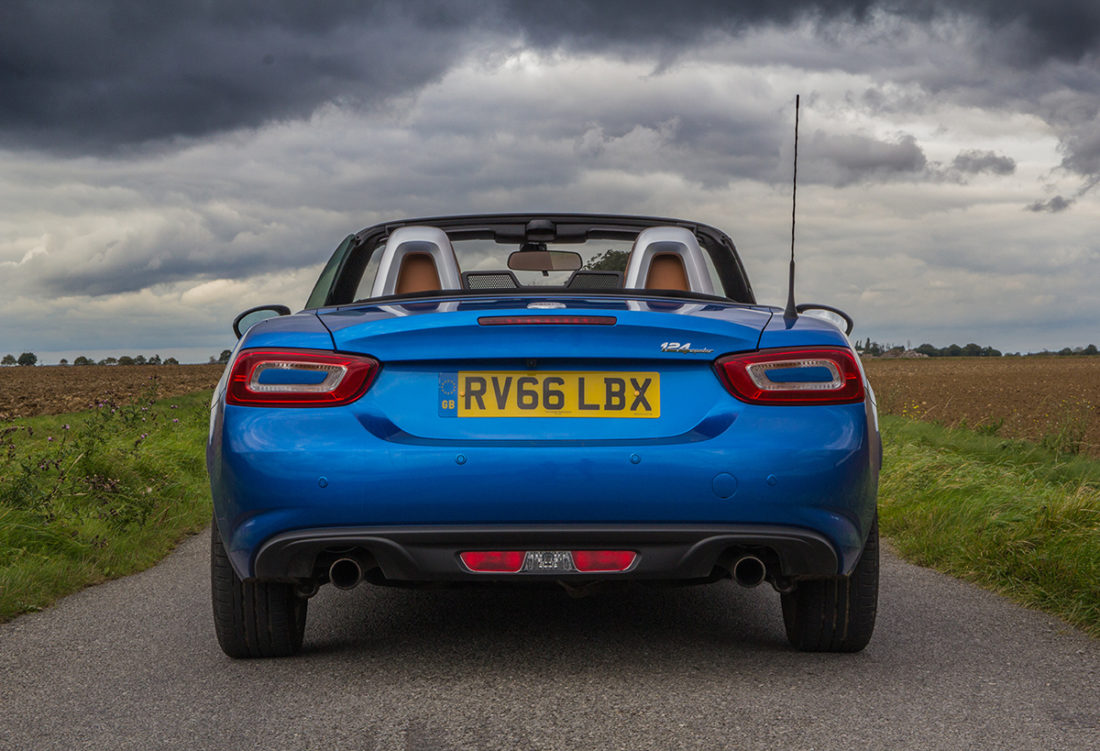 The Fiat 124 is a simple, fairly priced sports car that despite its modest output, is guaranteed to bring a little something special to either a daily commute or a weekend jaunt. While it’s too soft for the more serious drivers, the gearbox recoups some brownie points as does the steering. Its simplicity is refreshing in an age full of bipolar cars boasting a myriad of driving configurations. You just drop the roof, push the starter button and you’re off. 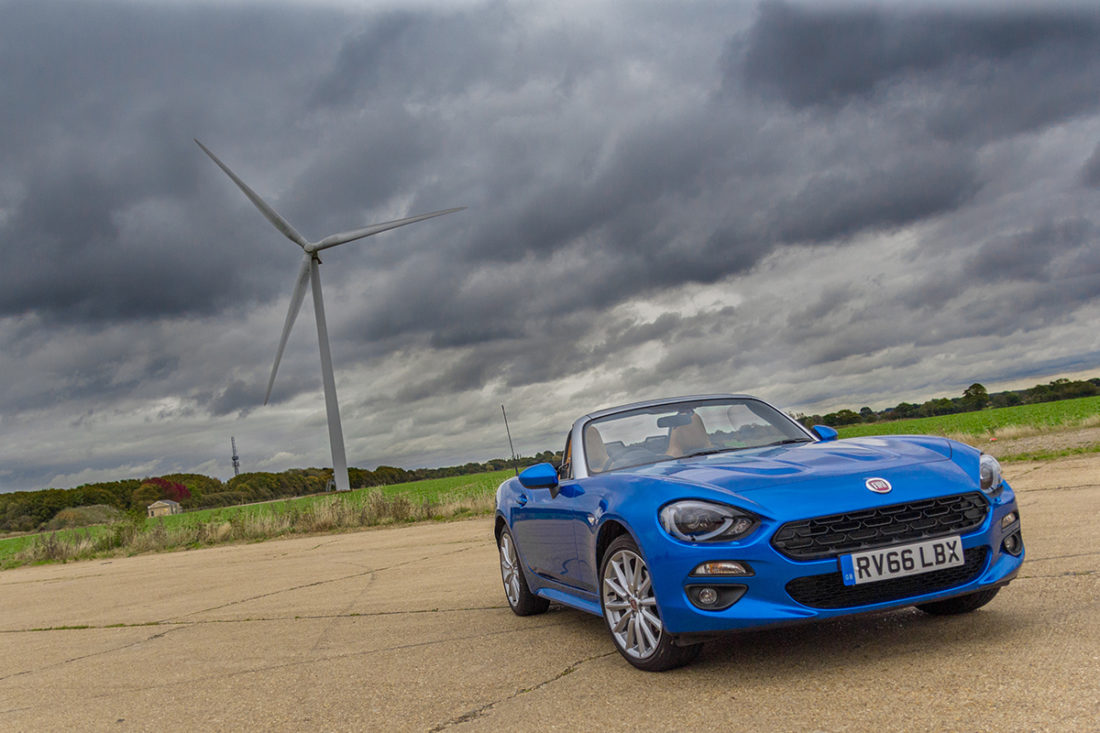 If you would like to jump in the driver’s seat of sports cars just like the Fiat 124 Spider, then head over to smartdrivinggames.com.
Summary
Reviewer
James Lazar
Date
2017-10-09
Car
Fiat 124 Spider
Rating
4