It’s no secret the M3 has been top of the super saloon pile for decades, kickstarting the whole thing with the E30 in 1985 – I wonder if BMW themselves even knew just how popular their recipe would prove in the coming years. Available then only in two-door coupe and convertible form, the F80 generation was the first to defy convention with a two-door coupe bearing an M4 badge, leaving the infamous M3 marker to adorn the rear of the four-door saloon. Oh how the fans, myself included, whaled in despair at the German giants new naming system.

I, like some others however, soon realised that it did make quite a lot of sense when you looked at BMW range as a whole. Quite simply, the even badges, M4, M6 and the like, would be stuck to the back of the two-door cars. The odd numbered badges, including M3 and 7-Series for example, would go to the four-door cars. We’ll ignore the fact you can now get an M6 Gran Coupe with four-doors because I am unable and unwilling to try and explain.

Unsurprisingly, the naming system wasn’t the only controversy that surrounded the F80. The newest M3 received its fair share of flak as with every revision before it. Believe it or not, the E92 that preceded the F80 drew unwanted attention because of its 4.0-Litre V8; an engine still regarded by many as f*cking outstanding. The argument was M3’s should always have a straight-six, although the first generation featured an inline-four… Again, unable and unwilling to explain. The E46 that proceeded that had a scattering of complaints too, although it’s now considered by most to be the best version of the super saloon.

The level of heat that came down on the F80, however, was unprecedented. Not only did BMW strip the M3 badge from the two-door, but both two and four-door variations featured turbocharged motors. Sacrilege.
It was hardly a surprise move from BMW given the global attitude toward the well-being of Polar Bears and the ice caps they inhabit, but people weren’t happy. Five years on however, like with every iteration before it, people have grown to love the F80 and are sad that the next generation is on the horizon: no doubt it will receive a barrage of abuse when it finally arrives.
Now, having had more than enough time to digest it and with one of Motorhive’s own having purchased one, it feels like the perfect time to review the F80 M3.

Upon release five years ago the exterior was certainly a statement. A real smack in the face compared to the comparably anodyne designs of not only its predecessors, but it’s competition as well. And to my eye, it’s a gem. Sharp, aggressive lines up front, achingly curvacious arches with perfectly proportioned dished wheels and those all-important quad exhaust tips and bonnet bulge. It does everything a modern M3 should which is A) appear head and shoulders above a normal 3 series and B) like a cage fighter on crack, look ready and raring to fight anything to be crowned the best. 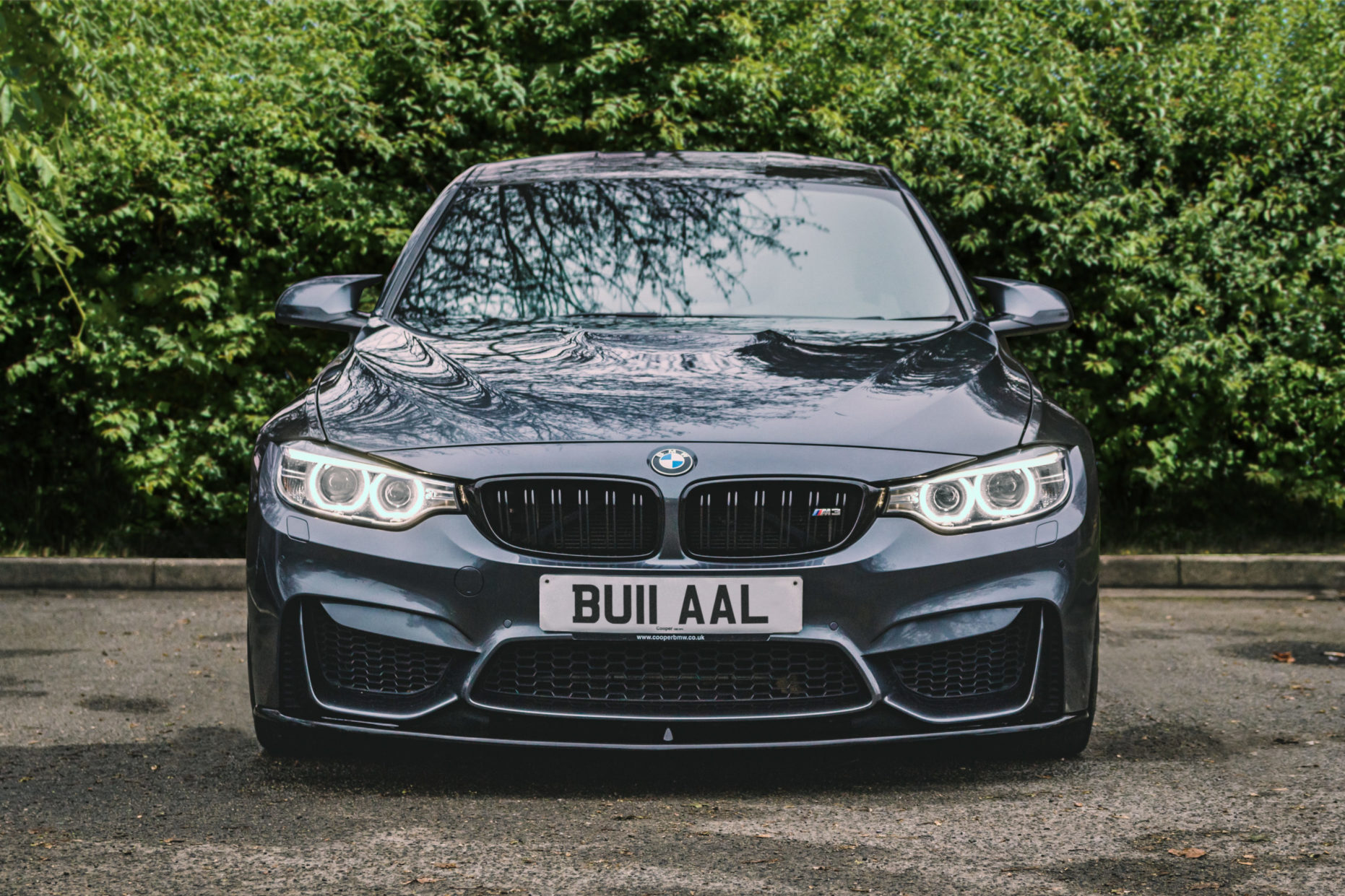 Inside is a typically BMW M affair and I mean that in the best way possible. Every surface not covered in smooth Nappa Leather wears a hardwearing alternative every bit as premium. Touchpoints are all as well made as we’ve come to expect of the M cars and the cabin features just the right amount of Carbon Fibre and M badging to make the experience special, without cheapening it. Fat heavy seats are replaced with lighter weight buckets in the M3 with plenty of support for when you’re being thrown around. The instrument cluster boasts analogue gauges for revs and speed; the former being of utmost importance to most petrolheads, while digital screens display the more mundane MPG, trip etc. 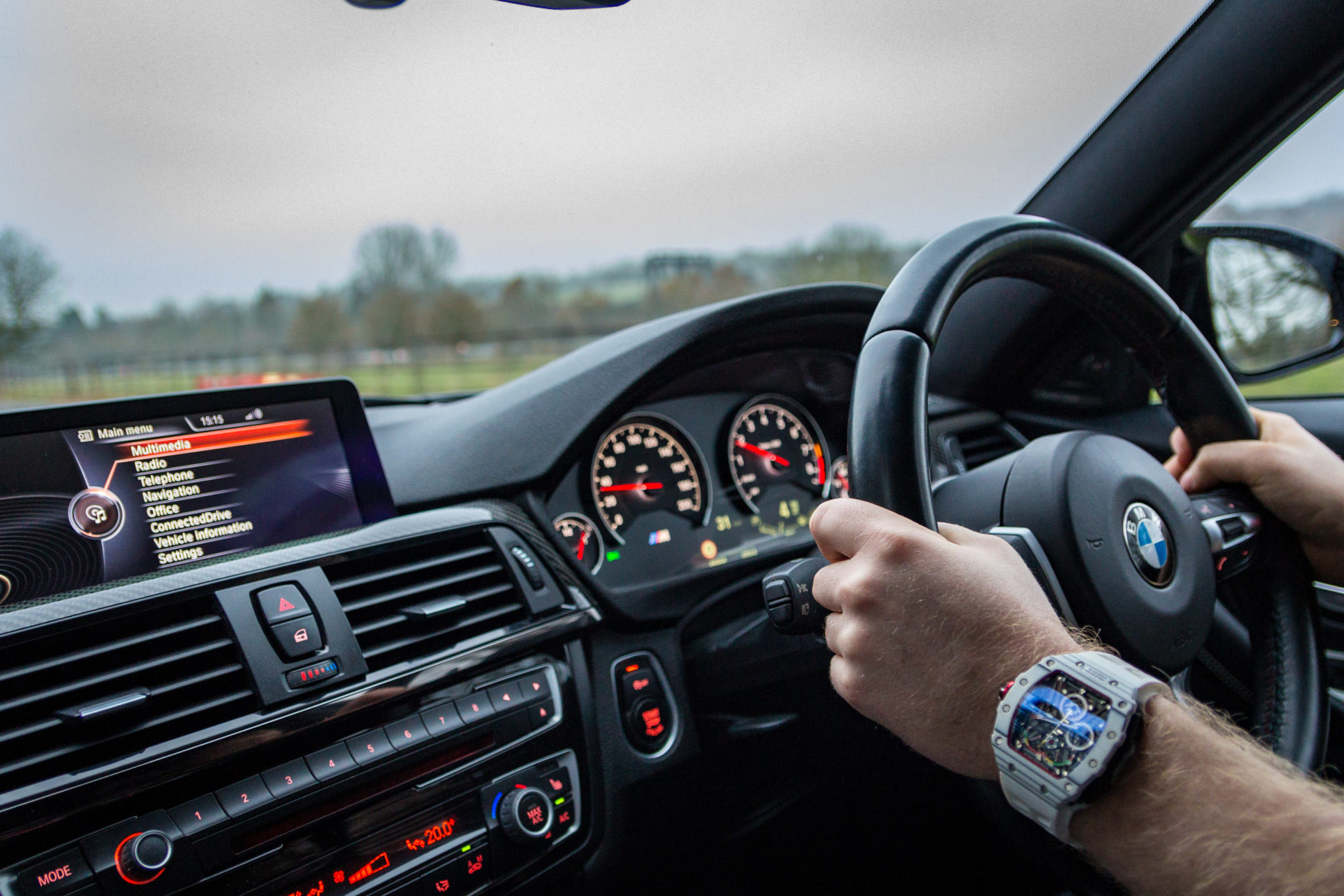 Seating position is bang on. The H-point is low and the scuttle is high enough to create an encompassing experience without compromising visibility – it’s a 3-series layout after all. Niceties like blind spot warning and a comprehensive back-up camera make the M3 an easy to manoeuvre near faultless daily driver. The heads up display fitted to this example is excellent. It may appear on the surface to be nothing more than a novelty option, but soon feels like an essential instrument when pushing hard on a British B. Information is on a need to know basis showing only speed, red line, selected gear and impending collision warnings. Like a track day rule book, It’s simultaneously every bit as easy to read as it is to forget its existence when desired.

The infotainment system is without question the best in class. More intuitive to use than the Mercedes one and better visuals in my eyes than Audi’s offering. I can’t speak for the system in the Giulia, but to outperform BMW’s iDrive would be no mean feat and as good as the Alfa is meant to be, there’s surely more chance of Donald Trump becoming ambassador to Greenpeace than the Italians beating the Germans in this arena. 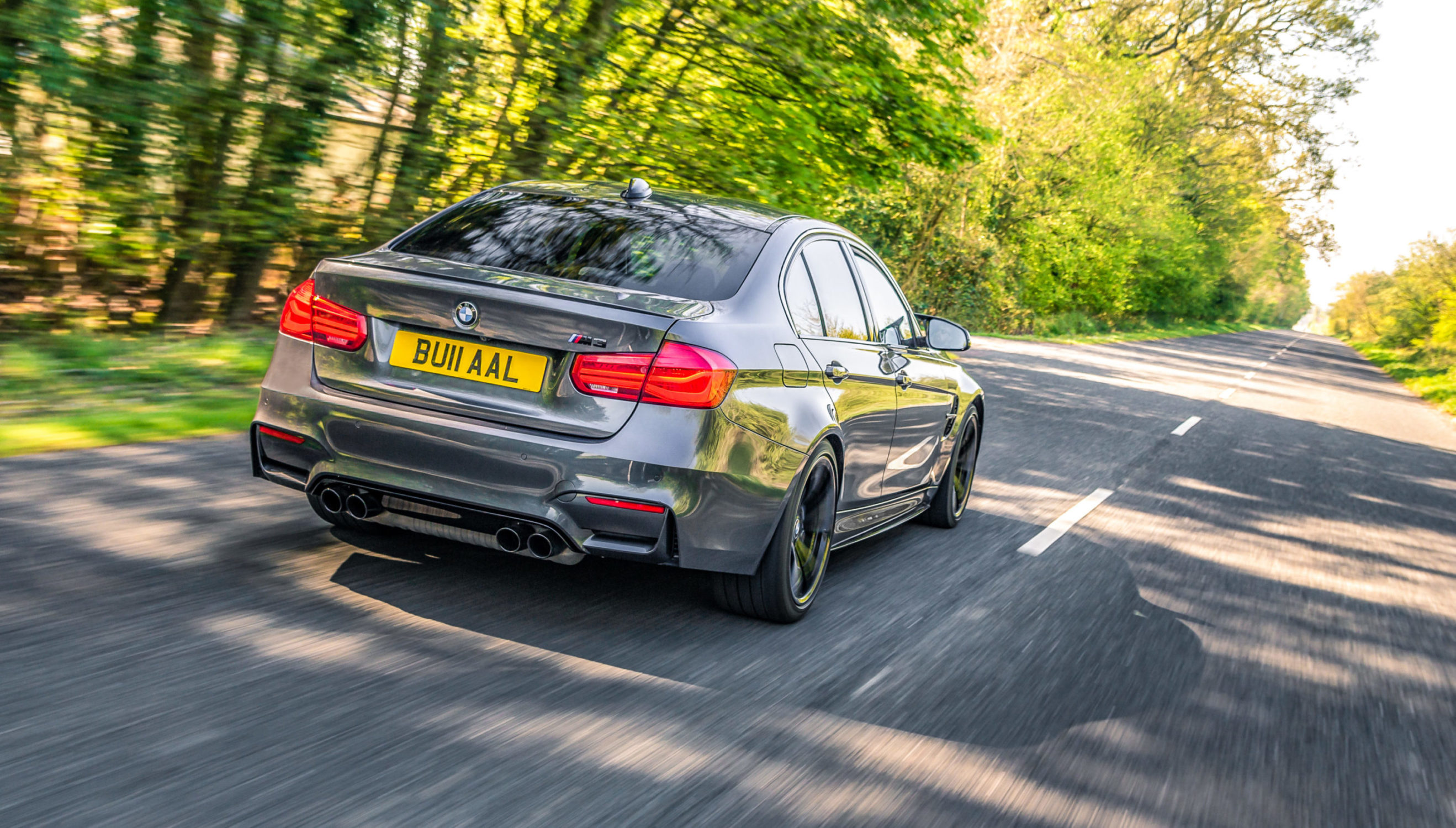 What is nowadays a given, even with the likes of fully fledged supercars, the F80 possesses a plethora of driving modes and configurations capable of delivering the cliche Jekyll and hyde like multitude of personalities. In its softest settings, the M3 is an easy to control, docile beast. The throttle is progressive and suspension supple enough to give purpose to the aforementioned scattering of M badges as without them, you could easily forget you’re behind the wheel of one of BMW’s best drivers cars.

A quick press of the M button on the steering wheel however, prods the beast with the proverbial stick. The dampers stiffen, steering weight increases and the Drivetrain sharpens unleashing a completely different animal. There must be turbo lag from the 3.0-Litre Straight Six, but even the most anal of drivers would struggle to find it let alone complain of its latency. It’s not the same symphony as the E90’s V8, but it’s still plenty anti-social enough with the optional sports exhaust. The 424bhp motor pulls hard and the torque offered up over it’s N/A predecessor is a welcome addition and make the drop in volume an arguably fair exchange. The DCT box is every bit as good as you would expect with the shift times of the blink-and-you’ll-miss-it variety.

The only niggle with the M3’s offering of personalities is that the exhaust cannot be controlled independently of the driving modes; a real issue for those so inclined to prove the inadequacy of their gentleman’s sausage by cruising around in built-up areas. The exhaust valves are only fully open when the drivetrain is in its most aggressive setting which means at slow speed, no matter how smooth your inputs, the car lurches and pulls at its leash like a badly behaved dog. Not ideal when parading around town. 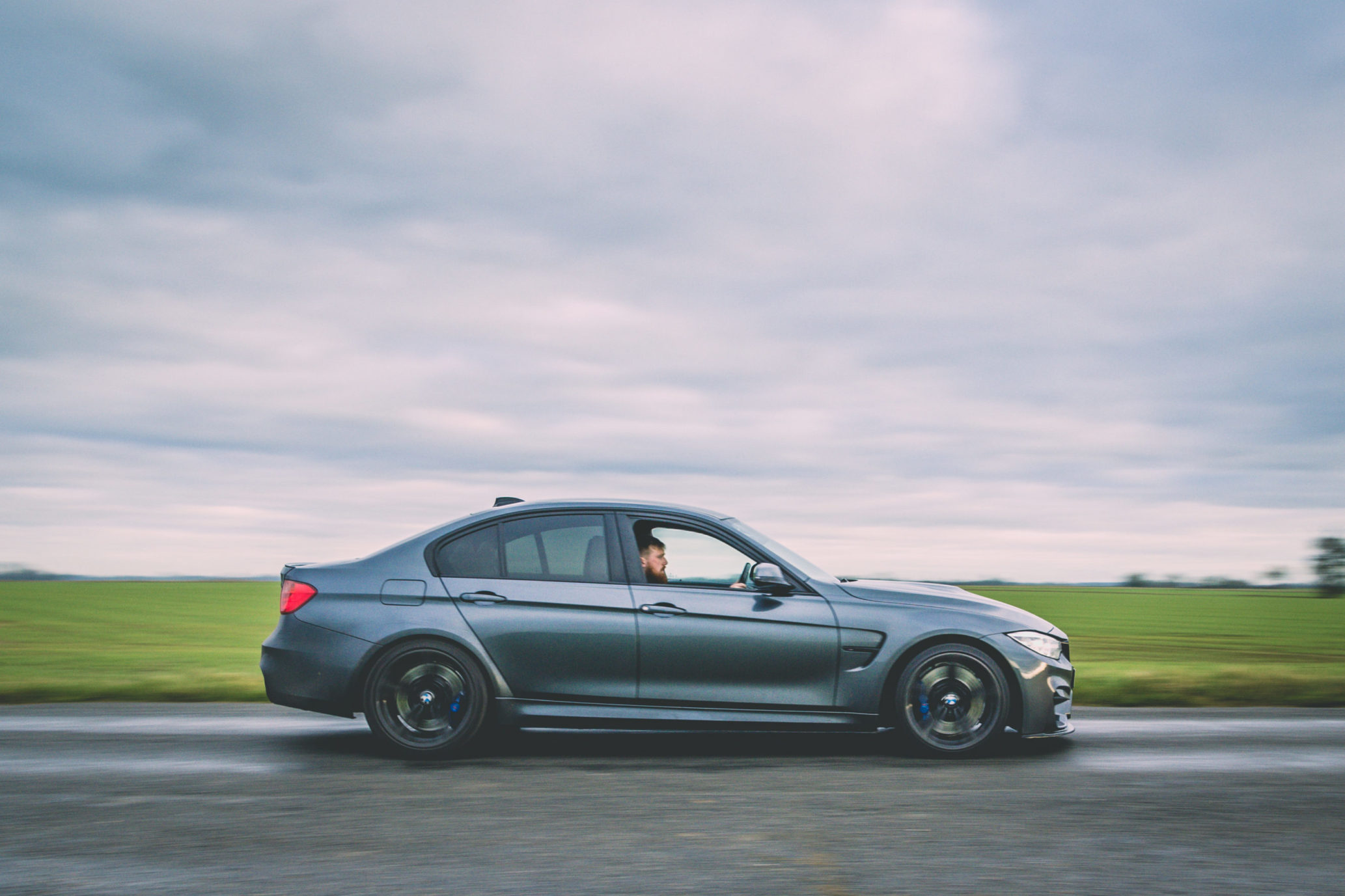 The steering is another component that found itself the subject of heavy criticism for being electrically assisted. It does lack some feel compared with the good old days of hydraulic systems, but if you compare to an ordinary modern day car it’s communicative and confidence inspiring. The feedback through the rest of the car is sublime and you can feel exactly what the rear of the car is doing through your own backend. Combined with the brilliantly forgiving MDM traction mode, the F80 is a car that wants to be pushed even in damp conditions. The systems allow the car to step out enough to put a grin on your face but rein it back in before you run out of talent and or road.

In summary, the F80 M3 is as brilliant to drive as it is to look at. No matter if the drive in question is a quiet trip to the shops or a all out blast along a country road, the M3 delivers. It’s comfortable, well made, has seating for four and is capable of embarrassing some fairly serious sports cars.